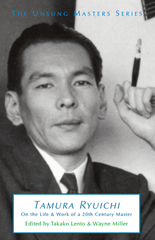 On the Life & Work of a 20th Century Master

This second volume in the Unsung Masters Series focuses on Tamura Ryuichi, a young rabble-rousing Japanese Modernist poet during the early years of World War II who was then profoundly affected by his experience serving on a gun emplacement to defend against the American and Soviet invasion that never came. After the war, Tamura became a key member of the “Wasteland” poets, who were inspired in part by Westerners such as T. S. Eliot and W. H. Auden and published Arechi (The Wasteland), a literary magazine that sought to chart a new course for Japanese poetry. Though he is little known in the U. S., Tamura is widely considered to be one of the most important Japanese poets of the 20th century.

Wayne Miller is the author of four poetry collections: Post, The City, Our City (2011), The Book of Props (2009), and Only the Senses Sleep (2006). He co-curates the Unsung Masters Series with Kevin Prufer and edits Copper Nickel.