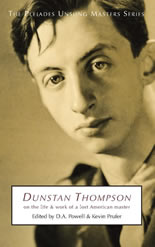 On the Life & Work of a Lost American Master

Largely unknown today, Dunstan Thompson was once one of the most celebrated young poets in America. Published during and shortly after WWII, his often harrowing, homoerotic poems—many set on the battlefields and in the hospitals of the European Theater—were compared favorably to the work of W. H. Auden, Hart Crane, and Dylan Thomas. Then, as far as the general public was concerned, Dunstan Thompson disappeared. In a series of essays, interviews, letters, and clippings, this book traces Thompson’s journey from a wildly successful literary enfant terrible, through his strong Catholic reawakening, and into his later years as a writer of mature, meditative, largely unpublished poetry. The first volume in the Unsung Masters Series, this book also includes a generous selection of Thompson’s very best poetry. This was edited by D.A. Powell and Kevin Prufer.