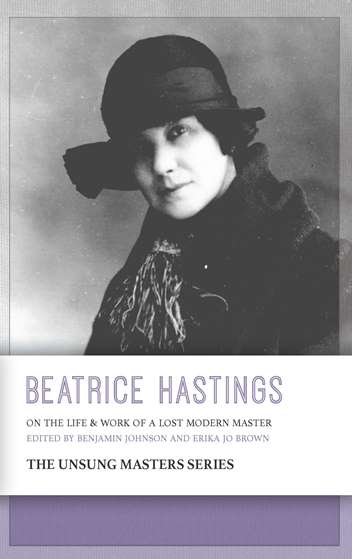 On the Life & Work of a Lost Modern Master

Beatrice Hastings (1879-1943) wrote prolifically for The New Age, a newspaper which she also helped edit, during its run in the early twentieth century. As the editors write in the introduction, “She wrote under a dizzying array of pen names: as Beatrice Tina, she was an aesthete, poet, and critic of restrictive roles for women; as D. Triformis, she was a withering essayist and opponent of the suffrage movement (and, for that matter, an opponent of Beatrice Tina); as T.K.L., she wrote dense, high-spirited parodies; as Alice Morning, she was a chatty, digressive diarist of Paris during the First World War; and as Beatrice Hastings, she combined a bit of all these personalities to craft herself into a skeptical, curious, and chameleonic public And then, she vanished.” Her writings expressed her acerbic style and talent for embodying multiple, complex voices and perspectives. However, this talent was one of the reasons Hastings fell into obscurity since not all her work could be easily traced back to her.

This eighth volume of the Unsung Masters Series draws together a folio of Hastings’s literary accomplishments along with critical essays from literary scholars, including Carey Snyder, Erin Kingsley, Sunny Stalter-Pace, Benjamin Johnson, Tyler Babbie, and Celia Kingsbury. The Series continues to bring the work of essential, out-of-print, little known authors to new readers. Volumes are distributed via Small Press Distribution, or free to subscribers of Pleiades magazine.

ADVANCE PRAISE FOR THIS VOLUME

“A principal member of the ‘dark’ avant-garde — the many artists marginalized even from the margins, often because of their social and political extremes — Beatrice Hastings wielded over a dozen noms de guerre (among them, Beatrice Hastings) and all with searing wit and considerable stylistic precision. And she had opinions — strong ones — on everything from motherhood (no) to war (no) to Futurism (maybe) to outrageous hats (definitely). A woman at the head of her time with a passionate commitment to progressive culture, she lived as vigorously and vehemently as possible. Her tone and turns of phrase take us back to the early years of radical European experimentalism with a truly uncommon vivacity.” —COLE SWENSEN,  BROWN UNIVERSITY

“Beatrice Hastings offers readers of this collection extraordinary insights into the possibilities and constraints of modernist writing. With her passion for both playful and furious repartee between her many alter egos and print pseudonyms, she embodies the richness and urgency of early twentieth century print culture. Yet her own voice has been little heard; her self-multiplying strategies have effaced her from modernist culture and history. This terrific collection finally redresses this neglect, and offers fresh perspectives on what it was like to write at the interstices of feminism, modernism and literature. Hastings’ writings range across gender, maternity, eugenics, parody, poetry and war…. The accompanying contextual essays set Hastings in dialogue with a stellar early twentieth century cast, including Virginia Woolf, Ezra Pound, the Women’s Social and Political Union, and Katherine Mansfield. She emerges as a maverick figure whose brilliance and venom are sensitively explored in this collection.”—LUCY DELAP, UNIVERSITY OF CAMBRIDGE